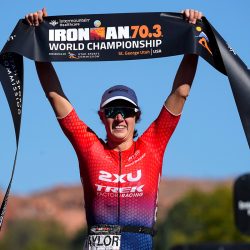 ST. GEORGE, Utah (Oct. 28, 2022) – In a day that was all about the sport’s top women, Taylor Knibb of the USA overpowered the competition at the 2022 Intermountain Healthcare IRONMAN 70.3 World Championship presented by Utah Sports Commission. At just 24 years old, Knibb used a 23:54 swim, a 2:14 bike, and a 1:21 half marathon to better her third-place finish from a year ago to … END_OF_DOCUMENT_TOKEN_TO_BE_REPLACED 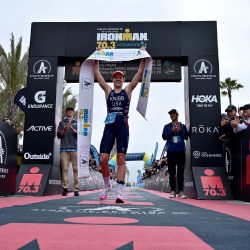 OCEANSIDE, Calif. -- With many of triathlon’s best on hand, Boulder's Taylor Knibb (USA) provided a dominate performance in the women’s professional race at this year's IRONMAN 70.3 Oceanside. Knibb secured her victory in a time of 4 hours 6 minutes 32 seconds. Brazil's Luisa Baptista finished second in 4:08:45, while Britain's Holly Lawrence rounded out third in 4:09:17. … END_OF_DOCUMENT_TOKEN_TO_BE_REPLACED 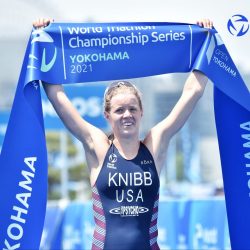 The 2021 World Triathlon Championship Series got up and running on Saturday with WTCS Yokohama, and it was a dream return to the blue carpet for USA’s Taylor Knibb as she delivered a timeless performance to win gold and guarantee herself a place on the Olympic start line. It was a devastating bike with Maya Kingma (NED) that dictated the race, the pair putting in a huge … END_OF_DOCUMENT_TOKEN_TO_BE_REPLACED 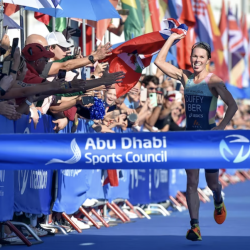 Flora Duffy became the only woman ever to win four World Triathlon titles on Friday afternoon in Abu Dhabi, with yet another display to underline her position as the greatest woman that the sport has ever seen. Shrugging off the soaring temperatures, Bermuda’s Olympic hero again produced the goods when it mattered most, navigating plenty of drama on the 40km bike and then … END_OF_DOCUMENT_TOKEN_TO_BE_REPLACED 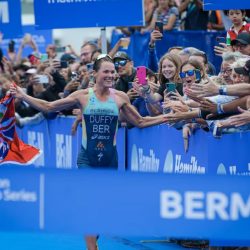 Barely over a week after the battle between Taylor Knibb and Flora Duffy in the IRONMAN 70.3 World Championship, the two met again at the 2022 World Triathlon Championship Series race in Bermuda. Although Knibb dominated the race in St. George to claim the IRONMAN 70.3 title, now it was Duffy's turn to show her determination to claim another World Triathlon Series title. With … END_OF_DOCUMENT_TOKEN_TO_BE_REPLACED