ISSUE #22, Winter 2003/2004 – After successful events staged in Idaho, New York, and Canada, IRONMAN North America made the fourth stop on its IM series in the lovely capital city of Madison, Wisconsin. September 7th was the time and Lake Monona was the place. Just over 1,800 athletes were on hand to test their mettle on what last year’s inaugural run had shown was a very challenging course. Included in those many faces, was Boulder’s own Amanda Gillam, racing in her professional IRONMAN debut.

Fresh off a confidence-building fifth-place finish at the Half Vineman in California, Amanda toed the line that unusually balmy fall day with high hopes of qualifying for the 2004 World Championship, of gaining experience at the ever-challenging distance, and of testing her fitness against some of the sport’s more accomplished athletes.

After exiting the water in a personal-best sixty minutes, Gillam covered the hilly bike course, seemingly unconcerned with the blistering pace being set by the early race leaders. After picking her way past a few speedy swimmers, a pro man or two, and a handful of verbally abusive age-group men, Amanda entered T2 as the eighth place woman. Next up was the marathon, and with a steady, controlled pace, Amanda moved her way into the top five, ultimately finishing in fourth place in a time of 10 hours 25 minutes.

Our conversation with Amanda follows:

CT: First off, what made you pick this particular IRONMAN race? And were you pleased with your choice?

AG: I had heard great things about the challenging course, and about how many spectators there are during the entire race. It turned out to be a great event.

CT: This was a PR for you on the swim, can you tell me a bit about that part of the race?

AG: I didn’t really do anything differently. My swimming has progressed a ton from past years, and I guess I just tried to stay steady throughout.

CT: Leaving the water you were about eight minutes down from the leaders, did this change your bike strategy at all? 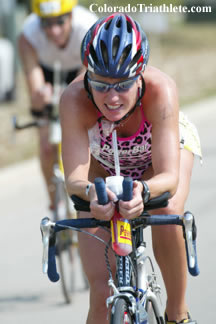 AG: No, it didn’t. My strategy was determined pre-race. I knew that I might have to make adjustments based on how I felt, but for the most part, I followed my plan start to finish.

CT: Were you aware of what was going on at the front of the race? If so, did that concern you?

AG: I had gotten reports that a couple women were putting some pretty serious time on the rest of the field early on, but I later got splits indicating that the time gap was no longer growing. I pretty much figured that they had gone out a little hard, and were maybe paying the price.

CT: It seems that you displayed a great deal of wisdom beyond your years’ experience with the distance, to what do you attribute this?

AG: My coach, Dave Scott, had given me some good advice, which helped. I had also done some solid training sessions that had me pretty confident.

CT: IM Wisconsin has a reputation for having a tough bike course, but one that is well-supported. What are your thoughts on that?

AG: It was a rolling course, which was tough, but most of the harder climbs were lined with spectators. 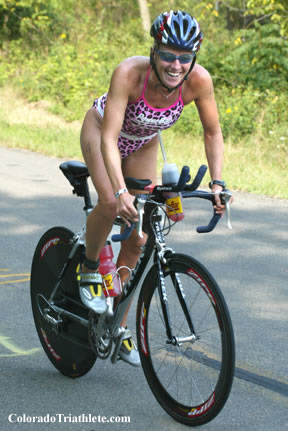 CT: Did any one part stick out the most for you on the bike ride?

AG: On one particular climb, there was a man in a devil costume chasing me up the hill.

CT: Starting the marathon you were in eighth place, did that factor into your run plan?

AG: Again, no. I stuck right to my plan. I was very even over the whole marathon. I really wanted to run conservatively, so I could have a strong finish.

CT: The run seemed quite hilly; how difficult did you find it?

AG: I didn’t really find the run that tough, except for maybe that last two miles…

CT: Finishing in the top four qualified you for 2004 IRONMAN Hawaii, was this expected?

AG: I had anticipated qualifying, provided I had a smart race. I knew that was key.

CT: Well, great job, Amanda! Those of us here at Colorado Triathlete were very pleased to see you have such an impressive race. Good luck with the upcoming season.

Springing Forwards and Falling Back