In each of the last two seasons here in the desert Middaugh had come close to defeating everyone’s chief rival – 4x XTERRA World Champ Conrad Stoltz – only to fall seconds short (by 32 seconds in 2009 and 39 seconds last year). 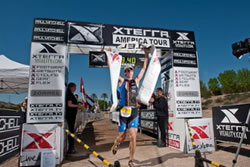 This year it looked like deja-vu all over again with Stoltz taking a seemingly commanding one-minute, 40 second lead into the run, however, Middaugh – fresh off a winter spent crushing the competition on snowshoes – put together a ridiculously fast run and caught Stoltz on the last big climb at about the four-mile mark and never looked back.

“Josiah is crazy. It doesn’t matter if it’s flat, downhill, or uphill he runs the same speed – fast,” said Stoltz after the race.

“I thought I had it but this course is very hilly, and he is such a great hill runner that I needed a bigger lead. I was walking up that last big climb and he just came flying past.”

“I’ve been snowshoe racing all winter and we run up stuff steeper than that hill so I really tried to peg it, get my heart rate going and just go for it,” said Middaugh, who won the North American Snowshoe Championship and USAT Winter Triathlon National Championship in the off-season.

“I knew the climbing was done by mile four so I had to attack the run. Conrad crushed the bike, and put more time on me than I had hoped for, so I had to run as hard as I could on every climb to try and make it back early.”

The outcome could have been different had Stoltz not gone off-course on the bike and lost a minute or more heading in the wrong direction.

“It’s really my fault. I pre-rode the course and new it well but ended up following some age groupers and we got off course,” said Stoltz. “It probably added a minute to a minute-and-a-half on the bike. I still thought I had it but in the end it was too much. But all credit to Josiah, he had a great race, especially considering he came right out of winter. He’s got good form, it’s going to make for a great summer of racing.”

While Stoltz had the fastest bike split, and Middaugh the fastest run, Branden Rakita – who was the top American at XTERRA Worlds last year – had the best swim and a solid bike and run to finish third, tying his career-best (he was also third at the XTERRA Canada Championship last year).

“It was really tight on the bike today, with a lot of guys hanging around up front like Branden and Seth Wealing so I was worried they’d sneak up on the run,” said Middaugh.

Former XTERRA World Champion Nico Lebrun was more than four minutes back out of the swim but made up that time with the third quickest bike and fourth-best run to propel himself into fourth place.

Chris Stehula, last year’s USAT collegiate national champ, had his best-ever XTERRA showing to round out the podium, while Jim Thijs from Belgium finished sixth and Wealing seventh to round out the money spots.

“This course was more technical than I thought it would be,” said Stoltz of the sandy, rocky, moon-like surface.

“I rode it on Tuesday and it was hard-packed and I thought it would be so easy, but with all the riders churning it up over the week it really got loose and more technical than you’d think, so anybody that rode well today should be proud.”

McQuaid Starts 2011 on a High Note

It was a tough off-season for long-time XTERRA great Melanie McQuaid having to live with the memories of an 11th place finish at XTERRA Worlds, a race she dedicated so much time and energy into. Nothing like today, then, to start the 2011 season where she’d like to finish it – on the top step.

“Nice to erase the bad memory of Worlds,” said McQuaid, who’s won World’s three times.  “Unfortunately you’re only as good as your last race so I had to deal with that, but this is much better and anytime you can win one of these it’s a pretty special day.”

Fellow countrywoman Christine Jeffrey provided perhaps the biggest competition to McQuaid on this day.  Jeffrey came out of the water with the top men and put together a strong bike that had McQuaid chasing her for most of the first 10 miles.

“Christine is riding really well and I didn’t catch her until the end of the first lap,” said McQuaid, who came out of the water third behind Jeffrey and XTERRA newcomer Kelsey Withrow (who later pulled with a mechanical).

“Once I past Christine it was hard to tell what was going on behind me because this course is really fast moving, almost criterium style, so you couldn’t tell where anybody was until you came up on them.”

While most expected reigning XTERRA World Champ Shonny Vanlandingham to make her move on the bike, she was so cold coming out of the water that she never really warmed up.

“That’s the coldest water I’ve ever been in.  I was hypothermic, came out of the water in a total daze and just couldn’t get it together,” said Vanlandingham, whose swim split was 29:46, five minutes off McQuaid and more than eight minutes back of Jeffrey.

The water temp was 62-degrees earlier in the week, but one-and-all said it was a lot colder than that today.  “It was probably in the high 50’s,” said Branden Rakita, and both he and Vanlandingham said they couldn’t even feel their toes until the second mile on the run.

Vanlandingham actually had the second-best run split, behind only the speedy Danelle Kabush, but couldn’t bridge a five-plus minute gap and was happy with second place.

Jeffrey ran past mountain bike expert Kelley Cullen, who was racing in her first off-road tri, to finish in third with Cullen in fourth.  Kabush rounded out the podium, with Emma Garrard and Suzie Snyder placing sixth and seventh, and Jessica Noyola eighth in her first race as a pro. 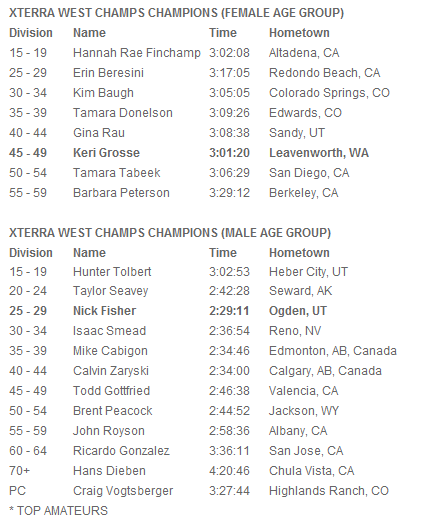 Today’s race was the first of six regional championship races in the nationwide XTERRA America Tour that holds 70 races in 35 states.

The top 15 pros at each event are awarded points based on overall pro finish.  Pros count their best five-of-six scores plus the points they get (or don’t get) at the XTERRA USA Championship in Utah. Thus, the final point total combines an athlete’s best five scores in the first six races, plus the USA Championship race points.  He/she with the most points in the end is declared the U.S. Pro Series Champ. The U.S. Series will dish out $143,000 in prize money: $10,500 at each regional, $20,000 at the USA Championship, and $60,000 to the top overall points scorers in the Series.