By Joel Reichenberger of the Steamboat Pilot & Today 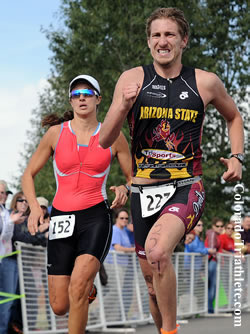 August 30, 2009 (Steamboat Springs, CO) – Having just won his second consecutive Steamboat Triathlon, Denver athlete Matt Smith had plenty he could take pride in. The thing that he was most proud of after finishing the fifth-annual event, however, wasn’t anything he did. It was what his wife, Molly Smith, accomplished

While Matt Smith won the men’s division of the race, finishing the .75-mile swim, 20-mile bike and 4-mile run across rural Steamboat Springs in 1 hour 32 minutes and 59 seconds, Molly Smith captured her age division for the first time in her five trips to the event, posting a time of 1:53:21 and finishing fifth overall among the women.

“Last year I was in second by six seconds so it’s great to move up,” she said. “Both of us shaved some pretty significant time this year.”

For Matt Smith, the key was consistency. He didn’t record the fastest times for any of the three legs, but managed to be in the top three of all of them.

He came out of the cold and swampy waters of Lake Catamount in second place, had the third fastest time on his bike, and knocked off the run in 24:33 for the second best split.

The race began at Lake Catamount about ten miles outside downtown Steamboat Springs. The biking section took riders back into town to the turnaround at the Steamboat Springs Winter Sports Club training facilities at Howelsen Hill. The run then led away from the lake along a gravel country road. 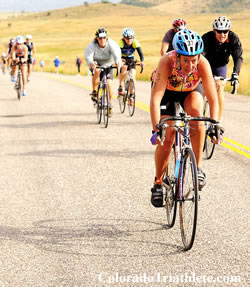 For Smith, it all added up to another victory.

“I grew up swimming so that’s always at least decent. Then with biking and running, I’m always good, but maybe not great,” he said.

“It’s a great course. What triathlon is all about is a community of athletes, and they bring that together really well here.”

Smith finished ahead of Tim Sandell of Colorado Springs, who was second in 1:37:06. Sandell was sixth out of the water, fourth in the biking leg and had the sixth best run.

Third-place finisher Jon Freckleton from Steamboat posted a time of 1:39:05, finishing high on the strength of the day’s best bike split.

Selene Perez won the women’s race, and said a strong swimming performance was the main reason. The Littleton athlete overcame her typical weakness of the bike for the title-winning performance.

“My swim was the best part. I was the second woman out of the water,” she said. “My bike usually isn’t as good, but I did pretty well there today, too.” 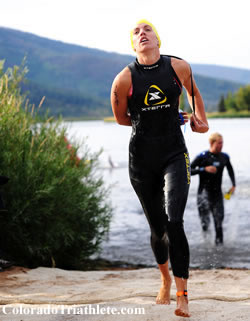 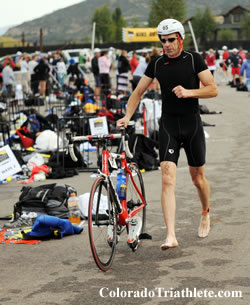