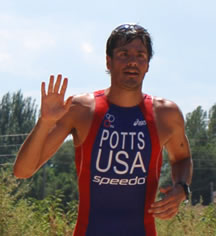 Potts Strong in the Water

Andy Potts once again displayed he is the sport’s most dominating swimmer as he led the men’s field out of the water with a 22:34 clocking. Three men chased the American up the swim finish chute 31 to 41 seconds back, including Americans Barrett Brandon and Brandon Marsh, along with Brazil’s Mauro Cavanha. A chase pack of six containing some fine swimmers found themselves over two minutes off Potts’ pace – that group included Kiwi Bryan Rhodes, Aussie Chris McCormack and USA’s TJ Tolllakson.

Tollakson Pedals to the Lead

Playing to his strength, Tollakson put his head down and powered his way into the lead over the sprawling Texas farmland roads. Tollakson’s race-best 2:08:12 bike split helped him establish a tentative 36-second advantage on Potts as the pair entered T2 and prepared for the 13.1-mile run. The third place finisher at the 2011 IRONMAN World Championship 70.3, Canadian Jeff Symonds, entered the transition in third, 2:18 off the leader’s pace, while McCormack hit the run in fourth, 3:43 in arrears to Potts.

Potts’ Patience Gets the Win

Over the opening four-miles of the run, Potts had methodically worked his way into Tollakson’s shadow and was only three-seconds back, with McCormack running in third with a 2:50 deficit to make up. By eight-miles Potts had clawed out a 20-second lead over Tollakson, while McCormack lost 40-seconds to the leading duo up front between mile four and mile eight, and suddenly found himself 3:30 behind.
Potts managed to hold off Tollakson over the remainder of the run and went on to capture the 2012 IRONMAN 70.3 Austin title in 3:51:29. Tollakson was tough all day and earned himself a sound second place finish with a 3:52:07, 38-seconds off the pace. McCormack rounded out the podium with a 3:55:24 finish, 3:55 off Potts winning time.

Athletes at Altitude: A Firsthand Look at IRONMAN Coeur D’Alene