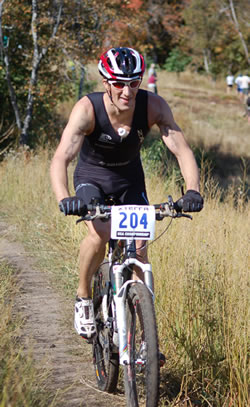 September 24, 2011 (Snowbasin Resort, Utah) – A former and future professional were at the top of the standings of the amateur division of the XTERRA USA Championship at Snowbasin Resort, near Ogden, Utah.

Ryan Ignatz, a former top-10 finisher in the pro division of the USA Championship, took first place overall among the amateurs this year. He finished with a time of 2:37:26, which was topped only by 11 professionals.

Ignatz, who is 33 and resides in Boulder, Colo., was an XTERRA pro as recently as 2009, and placed sixth at the 2006 XTERRA USA Championship.

Ogden’s own Nick Fisher was the second amateur, finishing with a time of 2:38:15. Fisher, 25, may soon join the professional ranks.

The top amateur female was Tamara Donelson of Edwards, Colo. She finished with a time of 3:04:01. Donelson, 36, also won the women’s 35-39 age group for the second consecutive year.

Heather Lyman of South Lake Tahoe, Calif., placed second among the amateur females with a time of 3:05:06.

Several triathletes added to their list of titles from the USA Championship, including two women who have now won seven.

Cindi Toepel of Littleton, Colo., also won her seventh USA amateur championship, and fifth in a row. She placed first in the women’s 60-64 division with a time of 3:45:18, which was more than an hour ahead of the next finisher in that age group.

Also of note, Steve Cole of Olive Branch, Miss., won his first XTERRA USA Championship. He placed first in the men’s 55-59 age division, one night after receiving the “Mr. XTERRA” award. Cole is a long-time XTERRA triathlete, and owns a record 11 regional championships.