An interview with Tony DeBoom

ISSUE #14, Winter 2002 – Starting out the 2001 season with a strong second-place finish at IRONMAN California, Boulder’s Tony DeBoom was in for a longer race season than he had planned. After his impressive race in May, he began to focus the rest of the racing and training of the season towards one important day: Hawaii. Unfortunately, the race did not go according to plan and Tony was forced to abandon the challenge of Kona. After facing such a disappointment, most athletes would call it a season and go on home to put the feet up. Tony, however, was not willing to let the season slip away without a fight. Just five weeks after Hawaii, Tony raced IRONMAN Florida and came away with an exceptional second place finish, as well as some valuable insights into his season and his career.

I caught up with Tony in his Boulder home where he lives with is wife Eliza, and his three dogs Thor, Doc, and Brick.

Tony could you tell us about your decision to race IRONMAN Florida this year?

“Florida was not in the game plan this year…by November of this year I had been planning on relaxing at home. Hawaii kind of threw a wrench into those plans. It was not the race I had expected to have. After the DNF there, I decided to take a week and see how I felt….see if I felt capable of gearing up for another race…which I did. I did a couple of rides when I got home and felt pretty good so I decided to get ready for Florida.”

If I could digress for a moment, your DNF in Hawaii was obviously indicative of a very difficult race for you. Would you give some insight as to what had happened?

“When you get to a certain level racing, finishing Hawaii is not the goal any more, but I think it should be. Sometimes I can forget that- but it should still be the first goal in racing Hawaii. I think that this year I was meant to learn a few lessons over in Hawaii before I could count on doing well over there. I actually was sure that I had learned them all before, but one thing that I realised this year is that you have to have a kind of peace in your life before you can expect to do well in race. For the three weeks before the race, I had some pretty stressful situations taking place, which were really difficult and distracting.

“Another really important realization I had was that my wife Eliza and I need to approach these events as a team. It used to be that I would worry only about myself and what I needed to do to prepare for a race, but now we realize that it is about how the two of us best prepare for an event together.”

Can you tell me about your preparation for Florida? Obviously most of the training previous to Florida was not, in fact, geared towards Florida but rather for Hawaii, but can you give some description of you the adjustments or changes you had to make in the weeks leading up to Florida?

“In Florida I felt like my race went pretty well. I did feel like my fitness had dropped in the five weeks between Hawaii and Florida, though in those five weeks it became apparent that I could definitely taper more for Hawaii. I think that I didn’t feel great in Hawaii- and once things started going bad in Hawaii , I wasn’t able to control my emotions like you need to in order to survive, and I think a lot of that had to do with the fact that I was not rested enough. I realised after Florida, having done well down there, that I do benefit from more of a taper. In the weeks leading up to Florida, I wasn’t training a whole lot. I was just trying to stay sharp but also relaxed.

“It was a tough thing to do- after putting all your energy and focus into one race such as Hawaii, and then turning around several weeks later and trying to give it one hundred percent was difficult. I went into the race very relaxed, I did not have really high expectations.”

So do you think that feeling less pressure helped you to perform as well as you did in Florida?

“Well, I had placed less pressure on myself, yet there was a lot of pressure from other sources. I felt like I needed to prove that my race in California this year was not a fluke, yet I wasn’t sure where exactly my fitness was at this time in the season.” 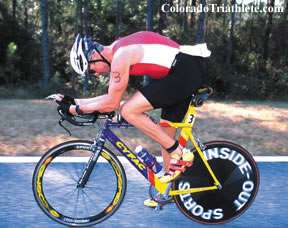 Can you take us through the different parts of the day, starting with the atmosphere at the beginning of the race?

“The race started extra early. They had the pros start at 6:25, an entire 35 minutes ahead of the age-groupers. It was a really early start. I was so afraid to miss the start, I had to sleep with the lights on, which really annoyed Eliza (laughs). No, but I had to get up at like 3:30 to get ready and get down there. We went down to the beach for the race start and it felt a little weird because all the age-groupers were not there. It felt really small.”

How did you feel in the swim?

“The gun went. We started out pretty easy. It was Spencer Smith and I leading, with Alec Rusevic right with us. On the second lap, it got a little choppy and those guys got a bit ahead. My goal on the swim was really to conserve my legs so I didn’t want to hurt myself to stay right with them. I let them get a little bit ahead. I think I was a minute back, but I got out of the water feeling really comfortable and right where I wanted to be.”

It’s a long day out there. You knew that a minute on the swim wasn’t going to hurt you.

“Exactly. I felt really good starting out on the bike. I was pushing the pace a bit. I heard that Spencer’s lead had grown to about five minutes. I think that is where it pretty much stayed for most of the bike.”

Any highs or lows out on the bike?

“Not really, I felt a little bit flat actually. I kind of expected this because of such a long taper. I did a bit of experimenting on the bike, with nutrition and position, just tried to fool around a little bit at this race. Considering how I felt, my bike split wasn’t bad. I knew that there were a couple of guys behind me towards the end. I rode very comfortably into transition, just wanting to conserve for the run, so those guys actually went out on the run a bit before me.”

“I felt lousy the first 10K or so. Oliver, who I knew was one of the best runners in the sport, grew a lead of about 1 minute or so. I really wanted to stay with him and see if we could maybe catch Spencer together. After a while, I really started to feel my stride. On one of the turn arounds, I realised that Oliver was not gaining on me, but had actually started to come back to me a bit which really gave me some more confidence. One of the things that I have learned in Hawaii and that I used at this moment in Florida, was that if you start feeling weak at all on the run, you need to eat. That is when you have to grab anything you can get your hands on at the aid stations. I just tried to eat and drink as much as possible to replenish everything I was depleting. I probably ate more during the marathon in Florida than I ever have in any other race.” 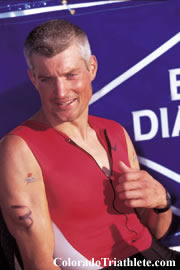 Did you catch Oliver Berhard?

“At about mile 11 or so , I did catch him. This was very motivating because as I said before, he has quite a background in running. I knew that as I went by him, I had to be as strong as possible, and I immediately put about 20 seconds on him. Eliza saw me after that and looked pretty surprised…She had seen me limping out of transition looking pretty bad and here I was running along in second feeling good. Just seeing my wife look so happy also really motivated me for the second half. People were giving me splits on Spencer’s lead which I think at one point was about 8 minutes, but they were saying that he was starting to fade and that his lead was shrinking. At the end of the run, I came in and crossed the finish line feeling satisfied. I was very pleased with my marathon, that it was back down around 2:49. This really proved to me that I have what it takes at the end of these races to challenge for the win.

“In California an 8:27 was great and I thought that was really fast. Now I realize my expectations have changed because after Florida that same time was satisfactory but not great. I know that I am capable of so much more.”

Any thoughts on which races you might do next year?

“Well, I actually thought about racing New Zealand. My wife and I think it would be fun to go down for a race. I definitely wouldn’t be peaking for it, it would just be good to go down and see where I’m at. I would like to race Cam Brown if I had the opportunity. Other than that, the season is really wide open for me.”

So you are thinking long course again?

“I am thinking long-course but I definitely have a different plan as far as training goes. I realize that I have learned so much in only one year about long course racing and I know that if I want to challenge for the title in Hawaii that I need to continue to focus on that. I also think that there some talented short course guys that are stepping up and I really need to keep my speed up. Even if it is just keeping in touch with them on the swim. It will be important. So I think that I will be doing plenty of short course races, all with the intention of working towards my long course racing.”

There you have it folks. It is evident that Tony’s confidence and experience will play a large role in his success in the upcoming years. One of the most notable things in speaking with Tony about his career is his apparent effort for-self improvement and his quest for knowledge within his sport. It is so often the opposite: as athletes become more and more successful, they are less likely to recognize the lessons they are learning and use them advantageously. Tony, however, seems to be taking full advantage of the challenges he’s faced, using them to strengthen his talents and successes- all of which we will no doubt see more of in the years to come.

The Power of Two

Amanda Lovato Talks about her Boulder Peak and 5430 Triathlon Wins

An Interview with Monica Caplan