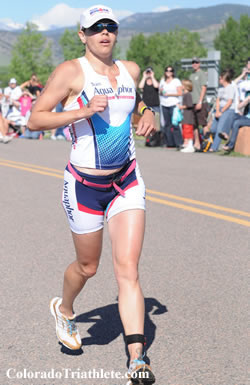 August 26, 2009 (Littleton, CO) – On Saturday, August 22, Julia Purrington and Richard Paradis were struck by a car while riding near the Chatfield Reservoir in Littleton, Colorado.

Purrington suffered severe leg injuries and had surgery to repair a damaged artery.

Paradis took the worst of the impact and has some head trauma. He is heavily sedated but has voluntarily moved his arms and legs.

Both athletes are part of Team Aquaphor and were gearing up for their final races of the season.

Purrington is a triathlon and swim coach, and mother of two young boys.

Paradis has a teenage daughter and a boxer named Ramone.

The local triathlon community has come together to put on a short swim event at Grant Ranch in Littleton on September 6th.

Along with the race there will be a silent auction with items coming from USA Triathlon, Specialized, Nathan, Yankz, Saris, GU, Retul, Endura, New Belgium, BeginnerTriathlete.com and many others.

Professional athletes have donated signed items as well. Local shops and restaurants have supplied gift cards and services while local race directors are pitching in entries.

There will also be an online auction starting on Thursday, August 27 for some amazing packages from companies including Somnio and the Challenge Family of events.

Interview with Bettina Younge, Head Coach of the 2001 CU