May 5, 2010 (Colorado Springs, CO) – Boys and beer got her into running decades ago and now here she was, reliving her greatest marathon experience, chuckling at all Wellesley signs that blurted, “Kiss Me, I’m Gay.” 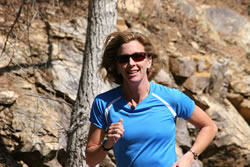 “I thought, ‘Wow, that’s changed.’ That wasn’t there 25 years ago,” said Lisa Rainsberger, who ran the Boston Marathon with her husband and daughter in April to commemorate her win in 1985—the last by an American.

Back then, as a twenty-something first-timer, Rainsberger barely noticed much of her surroundings. The heat was getting to her, and she was struggling to hold onto her lead.

But this time, running as an honorary starter and at a 4-hour pace, the Colorado Springs athlete-turned-coach had a chance to soak it all in—from the limo ride at the airport to the outrageous signs hoisted high by the screaming women.

As she soon discovered, it wasn’t just the signs that were different. Technology had changed. In 1985, race nutrition and hydration was primarily water—not gels, bars and Gatorade. And entrants weren’t loaded up with I-pods, fancy stopwatches and navigational systems.

The biggest difference of all, however, was having her family right beside her the entire race. They started together and crossed the finish line, hand in hand. The most profound moment came after they crossed, when Meghan—running in her first-ever marathon at age 26—broke down in tears of joy.

“You build up for something for so long, and when you finally do it, it’s such a relief,” Rainsberger said of her eldest daughter.

Her youngest children got to participate in some of the weekend festivities as well, with 8-year-old son Ian proclaiming at one point, “Mom, you’re a rock star!”

Indeed, there were tangible differences. In 1985, she stayed in the basement of a home in Hopkinton as the guest of a family that had volunteered to house an athlete. To this day, she doesn’t even know if the family knows she won. She got up early, and left the clothes she slept in behind, along with her toothbrush.

This year, organizers put her entire family up at the Copley Plaza Fairmount, with its gilded ceilings and crystal chandeliers. The expectations also were different. In 1985, she wore bib number 1 and was the pre-race favorite. This time she just wanted to make sure they all finished.

“A marathon hurts no matter what,” Rainsberger said. “The fact remains—it’s 26 miles. So when I raced, I just got done quicker, but the pain was still the same.”

Her recovery time, however, was quicker because she ran at a comfortable—not grueling—pace. Husband Bud, however, had one suggestion.

“Maybe the next time we run a marathon we ski less and run more,” she recalled him saying, noting that downhill skiing isn’t exactly the best way to train for a marathon.

Though Rainsberger is pushing 50, she’s still fit as ever, running, biking and swimming every week six days a week. Only now she’s usually helping someone else, whether it’s members of the Army’s World Class Athlete Program (WCAP) or wounded Marines. 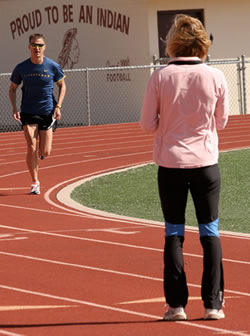 Lisa Rainsberger coaches Nate Pennington at Cheyenne Mountain High school. With Rainsberger’s help, Pennington hopes to make it to the Olympic Trials in marathon, and earn a spot in the 2012 Games.

Nate Pennington is among those who earned a spot in WCAP, with the ultimate goal of participating in the Olympic Trials and 2012 Games. He said Rainsberger already has helped him trim 25 minutes off his marathon time.

On the opposite end of the spectrum, Rainsberger is helping wounded Marines transition back to health and competition. One athlete she’s working with had his leg amputated above the knee; another below the knee. A third returned from war severely burned.

“They’re awesome guys and this program takes them and (transitions) them from a program of rehab into sport,” she said.

Triathlon was chosen, she said, because traditionally Marines didn’t have that experience growing up.

“We wanted to put them into a sport that is healing—with the swimming and bicycling aspect —that they would have nothing to compare to. They’re reinventing themselves, but are still able to get the same feeling of sport and competition,” she said.

Rainsberger, meanwhile, figures she’ll always be active, even if the economy has her crying foul. She was founder and director of two separate triathlons in Colorado Springs that are no longer possible because the bodies of water are no longer open to the public. One, Prospect Lake, was closed because of budget constraints, and the other used in the Cheyenne Mountain Triathlon is now private.

“It’s criminal,” Rainsberger lamented. “It’s the home of USA Triathlon, USA Swimming and the home of the USOC and they have their brand-new office complex but the city cannot balance a budget to save our pools.”

She’s hopeful that will change for the better. In the meantime, she counts her blessings to have grown up in better times, and remains thankful that her career as a runner has been so rewarding. It’s especially fortuitous considering she started out as a swimmer, only to see her Olympic dreams in that sport end when the United States boycotted the 1980 Moscow Games. 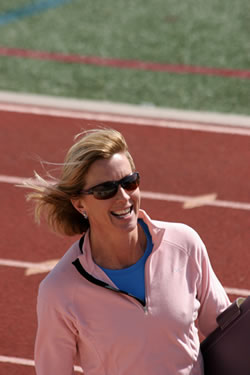 “I’m a purist,” says Rainsberger. “I don’t do gadgets. No headphones no Garmins. I grew up listening to my inner voice and I don’t need anything external telling me I’m good or not so good.”

Determined to get away from it all, the University of Michigan undergrad took a summer biology class that sent her to Wyoming. It was there that she discovered boys and beer, gained 15 pounds, and turned to running as a way to stay in shape. She eventually had to choose between sports and gave up her swimming scholarship, only to walk on to the cross country team and earn another full ride, making ends meet in between with student loans, a work-study job and Pell grants.

“It’s a risk that I don’t know I could ever take again but it was just something that felt right at the time,” she said.

Looking back, the mother of four couldn’t have asked for a better outcome to her running and athletic career, even if she would finish fourth at the 1988 and 1992 Olympic Trials in marathon and miss the Games.

“A lot of athletes have a very difficult time transitioning into plan B and never reach their full potential in other areas. They make it as far as they can as an athlete and that’s where it ends. I am so fortunate because I get that thrill every day, watching my other athletes and watching them perform and watching them achieve.”

From the sounds of it, 25 years later, Rainsberger is still living the dream.