ISSUE #11, June/July 2001 – In one of triathlon’s premier events, Ryan Bolton tested his long course legs and turned out the victor. Started 14 years ago, the St. Croix Triathlon would draw triple the age-groupers this year, as it was a Hawaii Ironman qualifier for the first time. This new status necessitated it being extended into a half-ironman. With the island heat and the infamous hill they call The Beast, a longer St. Croix would be no picnic. The pros were there for the money, though, as no Kona slots would be awarded to them. The race has been a favorite of pros for years. This running had some new faces. The men’s field was a mix of three U.S. World Cup racers Ryan Bolton (Boulder), Abe Rogers (Boulder), and Marcel Vifian; and Ironman vet Ken Glah. International Ironman distance specialists Peter Sandvang of Denmark and Kiwi Cam Brown threatened with their endurance strength. Pat Brown and Scott Schumaker (both Boulder), picked it as an early season replacement for a race in the Xterra series that had to be canceled.

By the end of the swim, Ryan was down over a minute behind a strong group of leaders, but with a quick transition, he didn’t let them get too far away in the early part of the bike leg.

“I had an O.K. swim. I really wanted to stay aerobic and not push into any anaerobic stores,” he said after the race. Bolton was being conservative with this longer distance race than he was used to.

“Wildflower was my first and only half prior to St. Croix.” The 1997 Wildflower, that is! 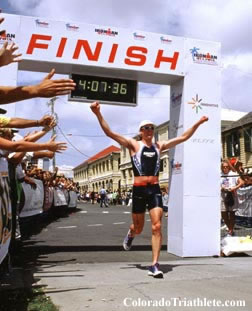 “I knew the race was long and I didn’t’t want to waste any significant energy on the swim.”

Pat Brown and Ryan were both having an excellent ride, but both of them, and Scott Schumaker as well, reported being very frustrated with a group of riders blatantly drafting in this non-drafting race. The honor system was not working for certain athletes on this course with no marshals. Some of them got a bit of cosmic playback, however, as they went off course and lost a few minutes.

Once on the run, no one could compete against Bolton.

“I passed Lees at mile 1, Clode at mile 3, Jimmy [Riccitello] at mile 6, and Sandvang at mile 10,” he said. “When I took the lead I was still a few miles from the finish. I was feeling really strong and in control, but it was very hot and I didn’t want to have a meltdown.”

Unfortunately, that’s what did happen to Pat, who went down with only a couple of miles to go in what had been a very good race for him up to that point. Ryan said he remembered Pat being right there and then all of the sudden he was gone.

“I kept running at a fairly conservative pace until the last mile and at that point I knew I had the race won.”