Story and Photos by Kristen McFarland

ISSUE #13, October/November 2001 – This year’s Bouder Peak Triathlon had arguably its best pro field ever as many of the best local athletes were joined by a few strong visiting international athletes. Many years the race is unable to draw very many from the cream of the local crop due to scheduling conflicts, sponsorship obligations, and other variables. Everything fell into place for this tenth anniversary edition, however, and the competition was world class.

The pro/elite open division started the first wave at 7 am in the half-full muddy Boulder Reservoir that was being drained out for the every-five-year inspection of the dam. As they exited the swim, Tim DeBoom was notably missing from the first group to head into T1. Then he appeared, running up the beach tugging on the neck of his wetsuit, complaining that the ill-fitting suit had been giving him fits in the swim.

Last year’s winner Conrad Stoltz of South Africa, who has trained the last two summers in Colorado Springs, had a big lead on the bike and came into the second transition before Tim DeBoom was even in sight. But Tim had planned on the day as a speed workout and flew out of T2 on a mission. The man most noted for distance ran a 32:46 10K, a full two minutes faster that Stoltz. He almost was able to pull ahead of Stoltz but ran out of room in the end. The speedy Stoltz defended his title.

Nicole DeBoom hadn’t done the race since 1996, when she wasn’t a pro yet but raced the elite/open division. Her sixth place result that year was just out of the money, but was a good indicator of the success she would have when she began to race pro.

She had a good swim, finishing just behind Susan Barthlolomew Williams and Monica Caplan. A fast transition and she quickly caught up to them. Taking the lead as she turned off Jay Road and on to U.S. 36, she was in the front before the famous Old Stage Road climb and kept the lead the rest of the race. Former Collegiate National Champion and up-and-coming pro Teri Duthie was shadowing her the whole race, but Nicole didn’t know it until the run.

“On the bike I didn’t know where anyone was at all,” she said. “Only at the half-way point on the run where I turned around could I see the people coming.”

Teri finished a half of a minute behind, and Susan Williams behind her. Xterra star Kerstin Weule of Evergreen came in fourth.

“I need to train more on the aerobars,”said the off-road specialist.

Former IRONMAN World Champion Lori Bowden was in town for a camp and doing some training with her friend Nicole. She decided to hop into the race for the heck of it. The distance specialist has always struggled with the swim and came out of the water well behind the rest of the elite field, but smiling.

“I had fun,” she said. “It was hard. I haven’t done an olympic distance race in three years, so I thought I would come do one at altitude!” she laughed. 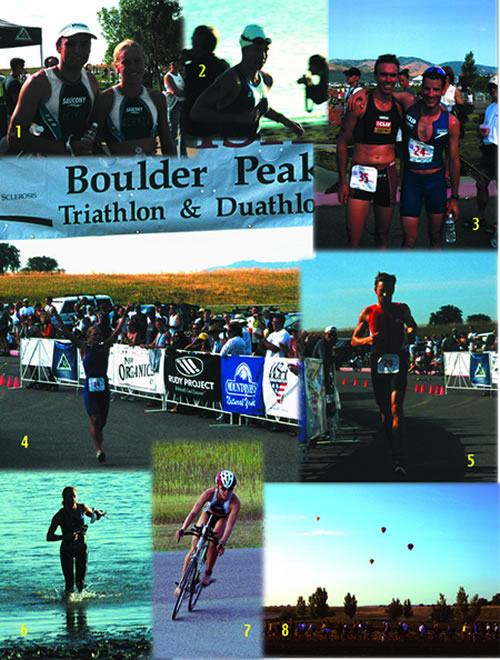 Springing Forwards and Falling Back

Kristen McFarland is an editor-at-large for Colorado Triathlete. As an athletic trainer and massage therapist, she works with professional triathletes in Boulder that have included both ITU and IRONMAN world champions.