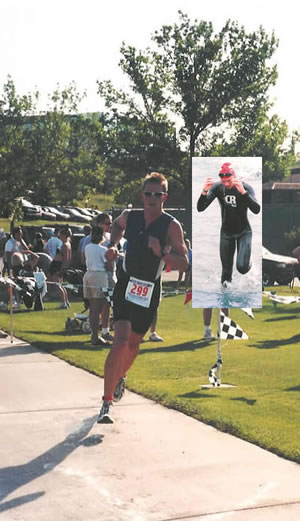 Boulder triathlete Curt Chesney is becoming known as one of Colorado’s top amateurs. Since his first triathlon in Longmont in 1999, Chesney has been a member of five national teams and received three All-American honors. Chesney comes from a professional cycling background, where he started racing for the Boccacio team in Europe at age 19. After 11 years of cycling, Chesney hung up the bike and retired from the European scene. He was ready to never look at a bike again…that is, until 1999 when he discovered triathlon.

You have been racing triathlons now for just over three years, how have you adjusted from focusing on a single discipline to three?

Knowing how much time to devote for each discipline can be difficult. Finding a balance between all three sports that will achieve the fastest combined time is what I find interesting about multisport.

What advice would you offer to other cyclists who are looking to make a switch to multisport?

Don’t change the way you have trained for cycling in the past. If you have achieved cycling fitness through racing and group rides don’t start doing only intervals and long solo tempo rides. A triathlon is all three sports, concentrate on swimming and running. If you have a big lead after the bike it means nothing if you can’t run.

In 2002, you won the Colorado Triathlon Series, which included distances from sprint to half-IRONMAN, and then you raced at Olympic distance nationals, and the world long course championships in Nice. Do you feel better suited to any particular distance, or do you have any distance you’re trying to focus your training on?

In 2001 I went 9:33 in my first IRONMAN and thought that was my distance. My next two IRONMANs got worse. I feel that I can race well at that distance but for now the short races are very appealing. I like to race a lot and, with short races I can race more. My training for long races is not much different than for short races, so I can compete at any distance throughout the season.

In the triathlons you’ve competed in so far, what has been your favorite course? What about your most memorable experience?

My favorite course is Nice, France. Locally it would be Loveland Lake-to-Lake. My memorable experience would have to be crossing the finish line in Hawaii last year after a bad race and swearing I’d never do that race again or getting a drafting penalty this year at Nice with no one in front of me.

How do you structure your training?

I like to make sure that I do one hilly run per week and one long run with tempo at the end. For the bike at least one group ride per week, which is usually my long ride and usually at least two hilly rides. I try to swim masters 4 to 5 times per week and rarely swim on my own. I do about half of my total weekly training on the weekend because I work full- time. I always bike Saturday and run Sunday so my legs can be used to running with fatigue from the bike.

Do you work with any coaches?

I like to do Dave Scott’s multisport classes one to three times per week. Dave has helped with my swimming and running. I’m my own coach when it comes to making my schedule and knowing what type of workouts to do.

Do you train best on your own or do you prefer to train with others?

Training with others is always more fun. I like to train with people that are better than me; it’s the best way to improve. Lately I’ve been running with Nathan Kirkland and riding with Mike Larsen and some of the local top cyclists.

Give us a glimpse of your favorite bike and run routes in the area?

Lee Hill to Ward, Peak to Peak to Estes. Or down South Saint Vrain for something shorter. I have some run loops from my house to South Boulder Creek trail to Mesa trail to Big Bluestem and back home.

What are your goals for the upcoming 2003 season? Locally, nationally, and beyond?

I’d like to continue my 2002 streak as first amateur at all local races. This will be more difficult next year as there are some good local amateurs that I am sure are improving faster than I am. I’ll be racing long and Olympic distance world championships next year and would like to be top three in my age group. For 2003 I will travel more to attend races that attract top amateurs.

I know you’ve raced on a serious level in cycling, and now you have a more laid back attitude about triathlon. But given continued success in the sport, would you ever have any desire to get a pro license?

Right now I would rather compete with other athletes that have to work full time so there is an equal playing field. There is still a lot that I would like to accomplish as an age grouper.

What is the most important aspect of the sport for you?

Being healthy and fit is the reason I got into triathlon to begin with and is what motivates me to train hard. I’ve met some pretty cool people too.

What is one accomplishment you definitely want to achieve as a triathlete?

I would like to be an age group national or world champion at any distance. A sub 9 hour IRONMAN would also be nice.

Where will your first race of the 2003 season be?

ITU long distance worlds in Spain on May 11th will be my first important race. I may race in Arizona in March.

Good luck and thanks!