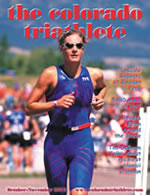 ISSUE #18, October/November 2002 – Early on Sunday morning, August 11, 2002, there were many signs that a beautiful day awaited the 1200 plus athletes that were to take the waters of the Boulder Reservoir for the 11th annual Boulder Peak Triathlon. Among these indicators were the half a dozen hot air balloons that peppered the eastern sky. Their presence belied the cool temperatures that greeted the competitors as they readied their bikes, their running shoes, and their goggles for the popular late summer classic. Another dead giveaway was the lack of even one solitary cloud overhead; a state that would later aid in creating some of the driest, hottest conditions the race had ever seen.

Prior to the start of the race, age-group triathletes and duathletes prepared themselves for a morning of challenging of running, biking, and swimming (or running). While they did so, seasoned veteran of the sport, Wes Hobson, worked the microphone in the true style of the favorite Sportscaster Greats. His humor was a helpful touch in easing the tension that most of the participants, many of whom were first time racers, were feeling.

As wave number one departed (the duathletes), several of Boulder Tri Club’s finest were preparing to jump into the 74-degree water. Included in that group was Cisco Quintero who was partaking of the day’s festivities as a tune-up for Ironman Canada. In spite of having to deal with changing a flat tire prior to starting the race, Cisco’s attitude was characteristically humorous; his plan for the day,”To kick some ass… but enjoy.”

Pre-race instructions called for the first wave of swimmers-the women aged 30-34-to head directly into the blinding sun, heading left of the sailboats, right of the first buoy, and toward the turnaround which was somewhere out there… they were assured. Some nineteen minutes later, the first women exited the water approximately five minutes ahead of eventual top amateur, Amanda Gillam. From that point, Gillam maximized her biking prowess en route to notching the fastest age-group bike time of the day. From T2 to the finish tape, Gillam was able to enjoy a comfortable lead on her way to victory in her first appearance at Boulder Peak. On the men’s side, Timothy O’Donnell ripped through the water in a day’s best 17:39. He left the rest of the 20-24 age group in the dust while biking 1:04.20, and managed to top the amateur field for overall honors by running the 10K in 35:40. Although both of the age-group winners enjoyed the benefits of wetsuit-aided swims and slightly cooler temperatures, the day’s top amateurs’ times placed them second and fifth amongst the pro women and men respectively.

As the age-group dust was settling, the professionals were readying themselves for the Clif Bar Challenge, a format that pitted some of the sport’s best women against their male counterparts in what had become the most competitive Boulder Peak on record. As eleven pro women entered the water, prepared to vie for a share of $17,500, some thirty men were anxiously waiting for their chance to nab a bit of dough-their start time: 9minutes and 42 seconds later. In addition to the prizes awarded to the top ten men and women, a $1000 bonus would go to the first person across the line.

Exiting the water first for the women was USAT Resident Team member, Susie Gallucci. And hot on her heals was local favorite, Nicole DeBoom whose pre-race goal was to duplicate last year’s feat of being the first to summit Olde Stage Hill. Knowing a nice bonus would be awaiting her, she weathered cramping legs to grab the lead just after reaching Jay Road. After “just getting over the climb”, Nicole maintained the lead throughout the rest of the bike. Starting the run she determined it was going to be a day to work on her run technique. Knowing that she might be facing a rough go, she focused on taking small steps and not letting more cramps form. Admitting she did not have a good run, she noted that the heat might have had something to do with her struggles. Milling about the finish line, pleading for more water, and just before she doubled over to take a hit of asthma medicine, she commented: “this was the driest my mouth has ever been in my life by far.” Regardless of her dehydration, Nicole was able to snag top honors for the second year in a row. Swim leader, Susie Gallucci, held off all other female competitors to finish second ahead of Florida’s Allison Hayden. Teri Cady of Boulder and Santa Fe’s, Mary Uhl, rounded out the top five.

The men had their work cut out for them. And although they were doing well, only two guys managed to crack the top five off the bike. Fortunately, being within five minutes of the lead proved to be close enough for the males to take the Clif Bar challenge. A mere one minute and forty seconds after Nicole had left for her ten-kilometer jaunt on the dirt roads of the reservoir, 2000 and 2001 BPT champion Conrad Stoltz began his hunt. He stalked and chased and caught Nicole in just over a mile of running. Soon after she asked herself what her chances might be to hold everyone off, the South African who lives and trains in Colorado Springs blew by her. As Nicole modified her goal of being first across the line to being first woman across the line, Conrad focused on holding off a charging Tim DeBoom. The 2001 version of this race saw the current Ironman World Champion whittle away Stoltz’s lead down to the bitter end, coming up short by just seconds. This year a less dramatic outcome awaited the duo.

Stoltz, who two weeks prior had dominated the Keystone Xterra event, exploited his strength on the bike. Just as his wife had noticed on the run, Tim DeBoom saw first hand just how fast Stoltz was moving. Making up for an atypically slow swim (in part due to finding he was unprepared for a non-wetsuit swim only moments before the gun went off), Stoltz went for the gusto as soon as he left transition. DeBoom pointed out that while still on the Reservoir Road, “Conrad passed me, and he was just flying. Unbelievable!” His efforts moved him past DeBoom, and eventually into first place. As soon as he took the lead on the bike, Stoltz never looked back. Although he claims that he’s not a good climber, he managed to follow his standard philosophy that meant “going hard on the bike in order to form a comfortable lead, so that I can sort of control the run.” He did just that, as he managed to finish almost two minutes ahead of two-time runner-up DeBoom.

The now three-time champion, pleased with his overall efforts had plenty of praise for Boulder’s challenging short course event. He commented, “this is one of my favorite races, it is also one of the first races I ever did in the US, and I’ve always had a good experience here, so it’s a fun race.” Having traveled up from the Olympic Training Center to test his form prior to heading to some of the large national races, such as Mrs. T’s Chicago Tri, Stoltz agreed with the DeBoom family that races in their own backyard are often the most enjoyable. He added: “It’s a good atmosphere. My friends are all here and my coach comes out; it’s good to have everyone around.” Tim echoed this sentiment by mentioning how much he has enjoyed doing some of the local races prior to beginning his Ironman Hawaii build-up. Although he admitted that “it just hurt; this short stuff hurts, almost worse than Hawaii”, his love for racing had him happy to have been out there. Having not raced a triathlon since June, he added that the day revealed to him that in spite of his “old school” get-up (a pair of tri bottoms, but no top) and having “felt like ass”, he’s really looking forward to Hawaii.

Behind Stoltz and DeBoom, Brian Fleischmann, of the OTC resident team, posted a solid run to finish third. Fourth and fifth place went to two more local heroes, Tony DeBoom and Tim Luchinske. Closing out the top ten were past BPT champion, Cameron Widoff, in sixth; short-course specialist, Paul Fritzsche in seventh; Argentine transplant, Eduardo Sturla in eighth; Kiwi Ironman stud, Bryan Rhodes in ninth; and newlywed, Nick Cady in tenth. All in all, it was a great day for Colorado athletes, some of who are permanent residents, others who are astute enough to know that Colorado is unbeatable when it comes to summer training.

Colorado’s own shared equal success on the duathlon front as well. Amongst these runners and bikers and runners, two top-notch, elite runners came out to show that they have what it takes to excel in the world of multisport as well. On the women’s side, Katie Blackett a member of the Fleet Feet Triathlon team and current aspirant to the US Olympic marathon team, handily defeated her rivals to take home her first ever Boulder Peak Duathlon title. In finishing tenth overall amongst the men, Katie made use of a quick first 5K to distance herself from the field. In spite of having done very little cycling in the last several weeks (due to her concentration on marathon training), she maintained her lead on the bike only to create more of a gap on the final run. Her sub-40minute 10K left her four and a half minutes ahead of second place finisher, Kerrie Wlad, and nearly thirteen minutes from Maria Hopp, who finished third.

On the men’s side, former professional runner Sam Wilbur took home the first 5K of the day in a respectable 15:15. Having competed in the Olympic Trials in steeplechase in both 1996 and 2000, Wilbur was no stranger to the challenge of a tough run course. He attributed much of his success across the dirt road to his familiarity with the terrain: “I’ve done the running course at least 200 times in my life.” And because he lives just down the street from the Res, he had managed to cover the bike course at least twenty to thirty times prior to making his assault on this, his first Boulder Peak Duathlon. His “home-court advantage” allowed him to suffer through a 32:36 second run, to place him over six minutes ahead of second place finisher Chris Tolonen of Seattle. Securing the last spot on the podium was Cortino Garcia, a few minutes behind second place, but only seconds ahead of his sprint-finish rival, Jason Koop. When prompted to comment on the possibility of that being the last ever Peak Duathlon, Wilbur echoed the words of many great duathletes before him: “duathlon is a growing sport, and I can’t swim.”

Amanda Lovato Talks about her Boulder Peak and 5430 Triathlon Wins

A Peek at the Peak: The Nokia Pro Challenge Revisited