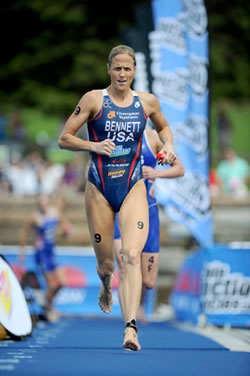 Bennett (Boulder, Colo.) will head to her second straight Olympic Games in August thanks to a time of 2 hours, 11 seconds on the 1,500-meter swim, 40-kilometer bike, 10-kilometer run course throughout Mission Beach. She was fourth in Beijing in 2008.

Bennett was among the first women out of the water and rode with a pack of eight leaders throughout the 40k bike. After helping build a 2:30 advantage on the chase pack heading into T2, Bennett and Haskins, who pushed the pace on the second half of the bike, quickly established themselves in the top four on the run. Toward the end of the first of three laps of the 10k, Jenkins and Densham pulled away from the field to leave the final podium spot up for grabs.

Bennett and Haskins were within a few yards of each other for much of the run before Bennett opened up a 13-second advantage heading onto the bell lap. By extending that lead to lock up third, Bennett claimed her first career World Triathlon Series podium finish and the third all-time by American woman – all coming in the past eight WTS events.

“It’s tough when you have go up against a good friend,” Bennett said on her duel with Haskins, a fellow Beijing Olympian. “I put a lot of pressure on this day. Last year in London I just had a terrible day for some reason; I’m still just not quite sure what happened. You know, in the end I think it was a blessing in disguise because there were things that I changed in my training that I wouldn’t have changed if I had made the team and I think it has made me a better athlete. It’s hard to have the courage to change things when things are going well. So, I’m really happy.”

With Gwen Jorgensen (Milwaukee, Wis.), and Sarah Groff (Hanover, N.H.) qualifying for Team USA with top-nine finishes in London a year ago, just one remaining spot was up for grabs in San Diego. According to USA Triathlon’s 2012 Olympic qualification criteria, the final spot could be claimed today with a top-nine finish. With two athletes finishing in the top nine, the final Olympic berth went to Bennett, whose third-place effort bested Haskins’ eighth-place showing.

“Even if I took (my legs) out of the race for the run we both worked really hard on the bike,” Haskins said. “We didn’t want to leave it down to us both coming into (the run) with a big group. Working hard on the bike allowed Laura to get on the podium. The goal was, essentially, to get an American on the podium.”

Groff placed 15th in 2:02:01 in her second race of the season. She was among the leaders off the bike before fading a bit on the run.

Saturday, seven U.S. men will toe the line looking to join Bennett, Groff and Jorgensen on the U.S. roster for the London Games. The first U.S. male to cross the finish line in San Diego will be London bound, regardless of placing. Two men can qualify for the U.S. Olympic roster in San Diego, provided they both place in the top nine. If necessary, any remaining spots will be filled by a discretionary selection by the USA Triathlon Elite Athlete Selection Committee.

Universal Sports will broadcast the races on tape-delay. The women’s event will air May 19; the men’s race May 20. Both races are streamed live online and will be available on-demand at UniversalSports.com.

The eight-event ITU World Triathlon Series is a key proving ground for the United States’ top triathletes aiming for a spot on the 2012 U.S. Olympic Team. In addition to racing for WTS points, athletes also will be looking to earn points toward securing a spot for their country at the 2012 Olympic Triathlon in London. The ITU Olympic Qualification Period closes May 31, 2012.