March 20, 2010 (Lake Havasu City, AZ) – Escaping the spring snow in Boulder, the University of Colorado Triathlon team traveled to Lake Havasu to find their racing legs over spring break. And for the second year in a row, the squad not only gained some valuable early season racing experience, but made a clean sweep of the Collegiate Mountain Conference Championships. 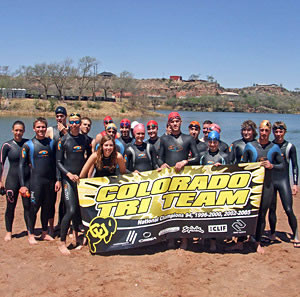 “They’ve been working hard and it showed on Saturday,” said Coach Mike Ricci, pleased that both the men and women placed seven athletes in the top fifteen.

Over the next four weeks, the Buffaloes will log their final preparations for the USAT Collegiate National Championships to be held in Lubbock, Texas on April 17.