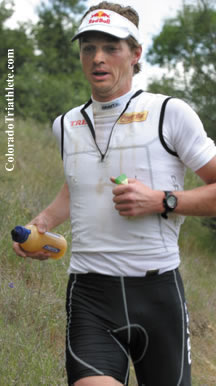 August 6, 2011 (Eidfjord, Norway) – Tim DeBoom, two time IRONMAN world champion, won this year’s Noresman Xtreme Triathlon in 11 hours 18 minutes 47 seconds.  A surprising second place went to Markus Stierli from Switzerland, with an impressive final brutal sprint from Rjukan up to Gaustatoppen. He was closely followed by the 2009 winner Tom Remman from Norway, who put up a brave fight with Tim DeBoom, but had to let him go in the final stages up the mountain.

Susanne Buckenlei from Germany won her third consecutive Norseman, setting a new course record with a time of 13:10:37. Second place went to Malin Lundvik from Sweden, starting the day with a strong swim, where she was overall seventh out of the water. Third place went to Cesilie Skollerud Hegna from Norway with a consistent performance throughout.

The 2011 Norseman had a challenging start. Cold water in Eidfjord forced a change to the swim, resulting in a 20 km longer cycle route. The swim first had heavy rain and after some time turned very windy.  Luckily, the weather improved significantly during the day, with 160 black t-shirt athletes expected to finish at Gaustatoppen, 1870 meters in glorious sunshine. The remaining white t-shirt athletes will finish at the Gaustablikk hotel, 1000 meters above sea level.

Norseman is the world’s toughest long-distance distance triathlon. It is also the most northern, taking place at the same latitude as Anchorage in Alaska. The race is a travel through some of the most beautiful parts of Norway. It is not a normal circuit-race as it starts in a fjord and finishes atop Gaustatoppen mountain at 1,850 meters above sea level. Total ascent is 5,000 meters. The water temperature is normally about 15.5 degrees C, and the air temperature normally ranges from 6 to 28 degrees C through the race day. The first of about 160 participants are expected to be allowed to finish at the top of the mountain. The others are allowed to finish at the mountain plateau.

The race is limited to only 240 competitors. The competitors need to bring their own support. Normally about 45% of the participants are non-Norwegians and about 15% are female. The prize to the winner is the same as to the last to finish at the top of the mountain; a fabulous black t-shirt. Norseman is the race any hard core triathlete should do once in a lifetime.

Norseman is owned and organized by Hardangervidda Triatlon Klubb. The approx 20 members of the club are the main crew of the event. These people are mainly either active slow moving triathletes or locals from the Eidfjord and Rjukan community. Norseman was organized at the first time in 2003 with 21 at the starting line.