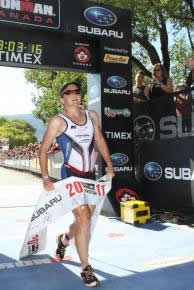 August 28, 2011 (Penticton, Canada) – Mary Beth Ellis of Superior claimed a resounding victory at IRONMAN Canada this weekend. She not only won by a half an hour but also broke the course record that had stood for twenty-one years. This feat was especially astounding in that it was her third IRONMAN victory in eight weeks. She won her debut IRONMAN race in Austria with a time of 8:43:34, joining a very exclusive group of women who have broken the nine hour mark. In addition, she broke the record for the fastest IRONMAN debut in history. Just a month later she backed that up with a win at the new IRONMAN Regensburg race in Germany. Neither of those races had a high number of points in the new Kona Points Rankings system, so in order to garner one of the last women’s slots for Kona, she decided to race Canada instead of waiting for another year to tackle the world championship. Ellis came in second at both the 2008 and 2009 IRONMAN 70.3 world championship, and also won the Pan Am Games (Olympic distance) in 2009. This year she decided to start working with renowned coach Brett Sutton of Team TBB.