Podium Finish is a WCS First for U.S. Women

June 19, 2011 (Kitzbühel, Austria) – USA Triathlon National Team member Sarah Groff earned the first-ever podium finish for an American woman in the ITU World Championship Series on Sunday by racing to the bronze medal in the third event of the 2011 campaign. 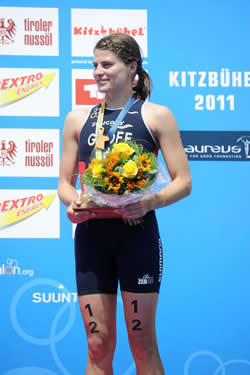 Groff (Hanover, N.H.) earned her top career WCS finish in a time of 2 hours, 6 minutes, 27 seconds on the Olympic-distance course. “I thought getting seventh at Madrid a couple of weeks ago was pretty big – this is just a whole other level, and I’m still kind of processing it,” Groff said. “Honestly, I just wanted to get another good race under my belt and I was hoping for the top 10, so to get on the podium vastly surpasses any of my wildest dreams right now.”

Laura Bennett (Boulder, Colo.) was sixth in 2:06:44 to give the U.S. a pair of women in the top six of a WCS event for the first time in the history of the three-year-old series. Bennett finished in the top 10 for her seventh consecutive WCS start.

Canadian Paula Findlay earned her third straight gold medal in the series in 2:05:52 after she pulled away from Helen Jenkins of Great Britain on the final lap of the run.

Winner of her previous four events, Haskins was aggressive from the start and led the race by nearly 20 seconds out of the water with an 18:23 swim split. She pushed the pace for much of the bike and – along with Jenkins – broke away for a large portion of the cycling leg. The 19-woman chase pack made up a 40-second deficit by lap four of the bike, and a group of 21 entered T2 together.

Groff, Bennett and Haskins quickly established themselves among a lead pack of seven athletes on the run, but by the third lap, the likely podium finishers were settled with Findlay, Jenkins and Groff comfortably in front of the field.

“I know those girls are a whole other level of runner. If I could just hang on for 5k and not completely blow up, then I’d probably have a good run and end up top five or top eight or whatever the case may be. Turns out I was able to hang on for three laps, which I’m pretty excited about,” Groff, who earned a $9,500 payday for her efforts, said about her run.

Prior to Groff’s podium finish the top showing for an American woman in a WCS event was a pair of fourth-place finishes by Haskins in 2009 in Gold Coast, Australia, and Washington, D.C.

Following Sunday’s performances, Bennett remains in fourth place in the WCS rankings, while Groff moves to seventh through three events. The series resumes in Hamburg, Germany, on July 16-17.

“My goal for this season is still the same. All I want to do is make the Olympic Team for the U.S. We have such a great group of girls – I think we had all three of us in the top [15], so it was a great day for the U.S. It’s not going to be easy to make our team,” Groff said. “I’m still focused on making the team, and I’m not going to get too excited about this. I still have a lot of work to do. Those girls will keep me honest.”